This month’s podcast episode shone a light on Hamden’s own State Street Cemetery.  We interviewed one of our local historians, Mr. Anthony Griego, who gave the following story:

“State Street Cemetery has been part of my life starting back as early as the 1950s when I attended school at the State Street School next door.  I remember walking the dirt road with my classmates to the Whitney Cotton Mills factory which was in the rear of the cemetery.  After getting out of the Army in 1964 I made several trips to the cemetery.  Rachel M. Hartley’s book, The History of Hamden, Connecticut 1786-1959, told me that the State Street Cemetery was originally a few rods north and when the cellar for the wooden school house was dug ancient bones were found.  Rumor was the two front rows of stones of the cemetery contained no remains. I later also learned that the yard contained the graves of five men who have fought in the Revolutionary War. One of the cemeteries more famous persons was James J. Linton, a printer from England.  During the Boss Tweed scandal Linton wrote a piece entitled, “The House that Tweed Built.” Linton died in 1897.  At one time there was a maintenance company that took care of the yard who was the son in law of the last surviving Cemetery Board member.  By 2007 I noticed on one occasion stones had been uprooted for another nearby burial.  One stone had been broken in half as if a backhoe had driven over it. I was so outraged that I took several photos. I wrote to Connecticut Attorney General Richard Blumenthal in an effort to stop the damage to those ancient stones.  I wrote several articles about this problem in local newspapers.  So, today the State Street Cemetery remains deserted and forgotten.  A dedicated group of a few volunteers and veterans try their best to make the cemetery presentable.  Students from Quinnipiac University help twice a year with spring and fall leaf cleanup.  So sad that we have done so little to protect these abandoned cemeteries in Connecticut. State Street holds the remains of veterans from many wars.  It holds the remains of those in life who were forgotten and now in death they continue to be forgotten.”

Town Historian, Tom Shillieto provided the following pictures which were taken in 2014 during the initial clean-up of State Street Cemetery. 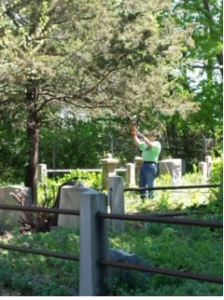 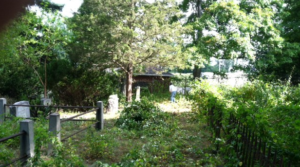 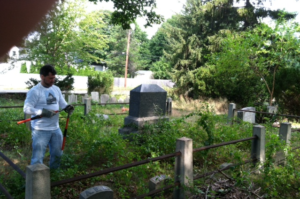